The method (PRO for short) is tested on a computer with Intel Core Duo 1.66 GHz CPU, 2G RAM, and Windows operating system installed. There are 3 segments of test sequence images, among which sequence 1 and sequence 2 are the same, and they all have a relatively static background. Sequence 3 was captured by a FLIR thermal imaging camera at a campus intersection, and it rotated at an angular velocity of about 4.5(°)/s in the horizontal plane during the shooting. In this sequence, the human target enters the field of view from the upper left corner, and leaves the field of view from the lower right side after traveling on the road for a period of time. Figure 3.29 shows the first frame image of the above test sequence, and the arrow superimposed on it indicates the moving direction of the human target. The segmentation difficulty of each sequence image is different. In sequence 1, the gray level of the human body is uniform and the contrast with the background is relatively high, so the segmentation difficulty is relatively low; in sequence 2, the contrast is low, the gray level of the human body is uneven and the edges are blurred, and the segmentation difficulty is significantly higher than in sequence 1; In sequence 3, the gray level of the target is very uneven and the edges are also blurred, the contrast is low, the noise is strong, and there are rapid background changes, so the segmentation is the most difficult. 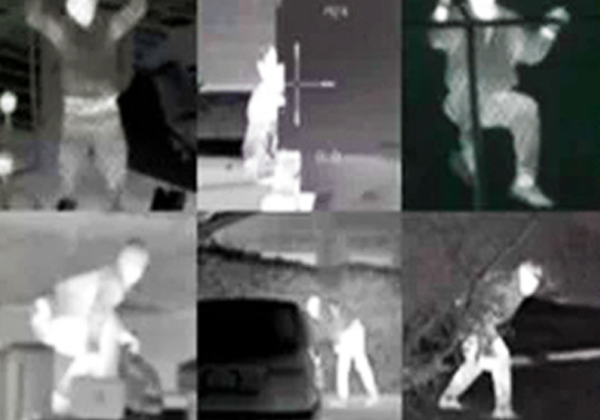